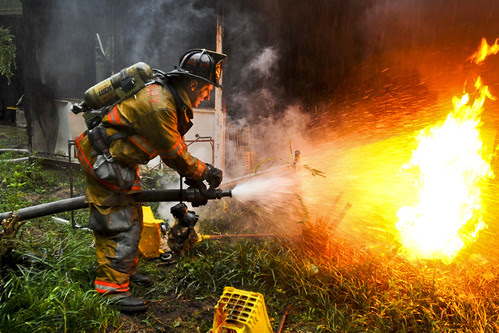 Putting out fires, a photo by The U.S. Army on Flickr.

rmy Pvt. 1st Class Lucas Ternell, a volunteer firefighter, and a member of the 20th Military Police Company, Maryland National Guard, puts out a small debis fire in the yard of a house fire in Salisbury, Md., Aug. 27. Ternell was aboard Rescue 16, which was one of several fire and rescue engines that reported to the fire inside a residential neighborhood. Guard members and civilian first responders are providing area support during the Hurricane Irene response. U.S. Army photo by Sgt. Darron Salzer