A helicopter drops water on the fire in Waldo Canyon on the U.S. Air Force Academy 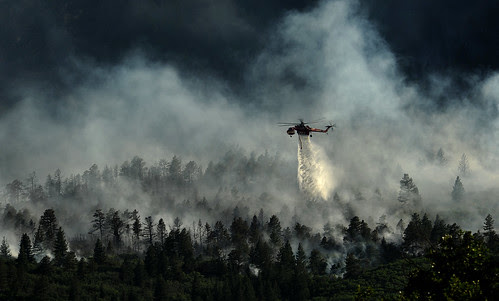 Via Flickr:
A helicopter drops water on the fire as firefighters continued to battle the blaze that burned into the evening hours in Waldo Canyon on the U.S. Air Force Academy on June 27, 2012. The fires, which have burned more than 15,000 acres, began spreading to the southwestern corner of the Academy in the early morning, causing base officials to evacuate residents. Officials estimated that the fire had spread to about 10 acres of land belonging to the Academy.
Currently, more than 90 firefighters from the Academy, along with assets from Air Force Space Command; F.E. Warren Air Force Base, Wyo.; Fort Carson, Colo.; and the local community continue to fight the fire.(U.S. Air Force Photo by: Master Sgt. Jeremy Lock) (Released)