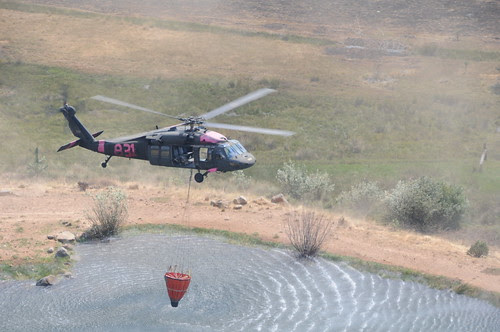 Via Flickr:
California Army and Air National Guard firefighting aircraft and their crews from the 129th Rescue Wing, out of Moffett Field, and the 3-140th Aviation Battalion, out of Los Alamitos, work out of a wildfire staging base near Redding, Calif., Aug. 24, 2012, where they maintain their birds, rest, and take to the skies with gigantic buckets of water filled from local dip sites and dropped on the fire line. The citizen Soldiers and Airmen are assisting CALFIRE and other local agencies in battling numerous blazes in the Golden State’s northern mountainous region. (Air National Guard photo/Master Sgt. David Loeffler)