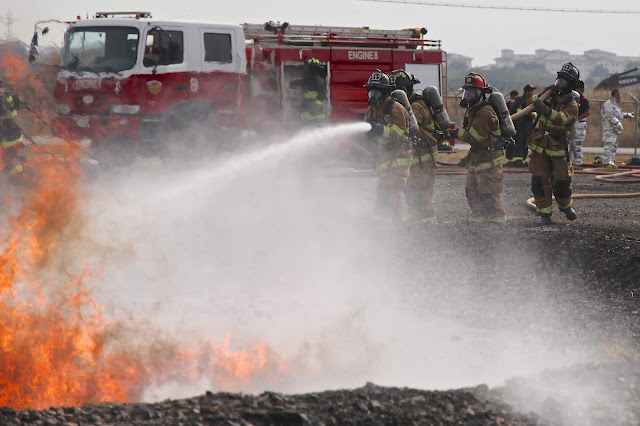 Camp Humphreys firefighters 'turn up the heat' with live fire training in Korea - 121023, a photo by USAG-Humphreys on Flickr.

According to Matthew B. Spreitzer, U.S. Army Garrison Humphreys fire chief, the week's training was primarily focused on building teamwork, while fighting aviation fuel fires during day and nighttime scenarios.

Home to the Army's most active airfield in Asia, Camp Humphreys firefighters take the possibility of an aircraft fire seriously. Although rare, such fires have the potential to involve large amounts of burning fuel and heavy smoke. It is for this reason, Dathan O. Black, the Department's assistant chief for training says he makes these events as realistic as possible.

"From a training standpoint, our fire crews need to be ready at a moment's notice," said Black. "Hopefully, we never have to respond to a real aircraft crash, but training like this helps ensure we are ready if called upon to do so."

"The first time a firefighter experiences a large, extremely hot aircraft fire, shouldn't be when they respond to a plane crash," said Spreitzer. "That would be very dangerous for the victims as well as the firefighters."

Spreitzer, whose fire department was recently named best in the Department of Defense, said teamwork in firefighting operations is extremely important for the safety of everyone involved.

"Teamwork is even more critical when dealing with aviation fuel fires, which are usually very large and extremely hot," added Spreitzer. "All firefighting personnel must be able to trust one another so each team can focus on their individual piece of the mission to ensure a successful outcome."

According to Black, the live fire training program was developed to provide firefighters an opportunity to practice their teamwork and firefighting skills in the same harsh conditions of heat, smoke and stress they expect to find when fighting aircraft-related fires.

"Our crews have been fighting large fires, with lots of smoke and heat, over the past few days," said Black, who was recently recognized as the Army's best fire service instructor. "Because we're the only garrison in Korea with the capability to put together this kind of training, we try to invite as many other military fire departments as possible to join us."

While training is a necessary part of his job, Black said the USAG Humphreys fire department enjoys hosting live fire training. According to Black, overcoming the challenges of fighting large fuel fires, like the ones being fought here, is also good for morale.

"Today's training really made me proud to be firefighter," said Pan, Chae-heyong, a member of the USAG Humphreys fire department. "It gave us a chance to work together as teams and practice the discipline needed to fight fire in a realistic environment."

According to Sprietzer, USAG Humphreys offers training to all DoD fire departments in Korea, as well as local Korean fire departments that have entered into mutual assistance agreements with the garrison.

"Everyone who comes to our training leaves with the experience and training needed to successfully fight aircraft-related fires," said Sprietzer.