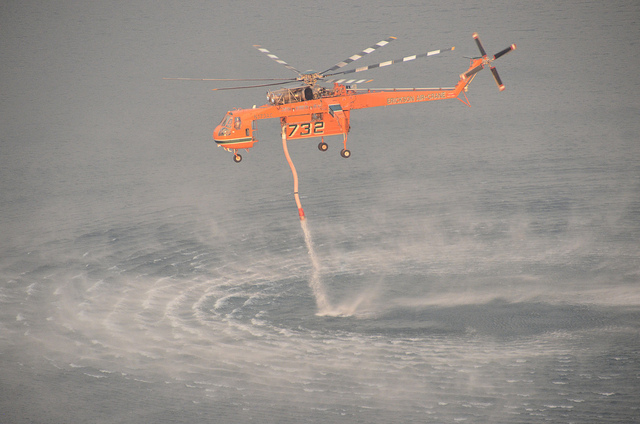 California Army and Air National Guard helicopter pilots from the 1-140th Aviation Battalion (Air Assault), based out of Los Alamitos, and the 129th Rescue Wing, out of Mountain View, fly their UH-60 Black Hawks and HH-60 Pave Hawks, Aug. 29, 2013, to the dip site at the Cherry Lake dam just west of Yosemite National Park to various bucket drop sites nearby. The aircraft rotated from dropping to dunking, sometimes with other civilian choppers. The pilots move in, directed by Cal Fire managers, who spot U.S Forest Service fire fighters on the ground or follow other guidance on where best to lay the line of water. (U.S. Army National Guard photo by Master Sgt. Paul Wade/Released)
California National Guard Doing Their Part to Contain the Rim Fire Nearing Yosemite 130829-Z-YY327, a photo by Like us on Facebook at CAGuard on Flickr.