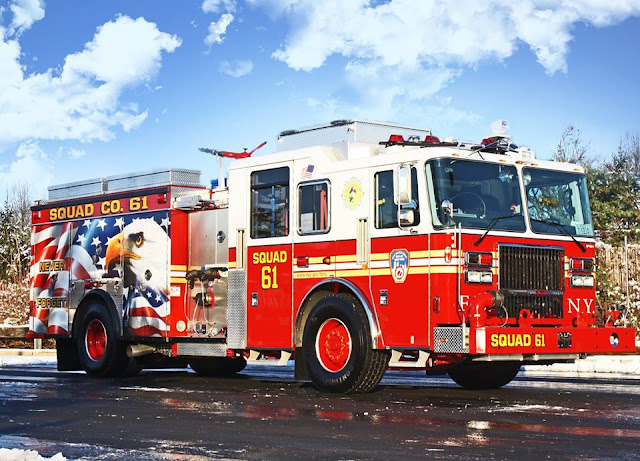 Clintonville, Wis. (February 7, 2014) – At the time New York City was recovering from the aftermath of the tragedy at the World Trade Center, Seagrave Fire Apparatus, LLC (Seagrave), its employees and suppliers, along with support from the community donated a 1000 GPM pumper to the citizens of New York. The fire apparatus was decorated with a mural, donated by the men and women of Seagrave, to serve as a tribute to the fallen firefighters of 9-11-2001. The mural features an eagle and the words Never Forget against a backdrop of an American flag.

Squad Company 61, in the Bronx, was home for the rig. It responded to more than 40,000 alarms, special events and countless daily routines and duties during the past ten years. Each time, it safely returned its members to the firehouse. It is not uncommon for citizens and tourists to knock on the firehouse door and ask if the rig could be pulled out so they could see in person what they had only seen in photos or on the internet.

“It is with some apprehension that we consider retiring the rig. It’s a special apparatus,” said Captain Stephen T. Spall of Squad Company 61. “We have become a well-recognized symbol as we travel the city streets. They tell us how our mural has encouraged them, and all that see it, to ‘Never Forget’.”

Seagrave has been supplying fire apparatus to the Fire Department of New York (FDNY) since 1901. Fire apparatus in New York City are typically retired after 10 years of frontline service and placed in reserve for backup.

“We are pleased the rig supported well the important mission in the Bronx,” said Seagrave Chairman & CEO, A. Joseph Neiner. “Seagrave has a long tradition of building the safest, longest lasting and best quality fire trucks in the industry.”

Squad Company 61 took delivery of a new 2013 squad pumper in December. This new rig replaces the retiring apparatus. The pumper has an Eagle Mural which is identical to the original design. This mural was also donated by Seagrave.

Considering the rig’s important mission and the honor of having supplied the inspirational mural for the original, Neiner concluded, “It was an important message in 2003 and it is no less today.”

Seagrave was founded in 1881. Seagrave is the oldest, continuous manufacturer of fire apparatus in North America and has built a reputation for safety, durability and longevity in the most demanding fire departments across the nation. Product brand names include Marauder II, Attacker HD, Meanstick, Force, Apollo II, Aerialscope II and Optimum. For more information, visit fwdseagrave.com.

For more information about this topic, please contact Michael Johnston, Manager Sales Administration by calling 715-823-2141 or e-mail Michael at michael.johnston@seagrave.com